Struggling with the reality-principle: Why carbon footprint feedback can backfire, and how psychoanalysis can help (Dodds 2013)

Carbon footprint feedback can be counterproductive, and make people more hostile to environmental issues, due to perceived challenges to their sense of identity (see BPS: Ecological footprint feedback can make people some people less green, British Psychological Society, Research Digest, Jarrett 2011). Amara Brook (2011) found that for students for whom the environment was not important for the sense of self-esteem, receiving negative feedback on their ecological footprint made tham actually less sympathetic to green causes.

'Ecological and carbon footprints are in widespread use, but the present study suggests that they may fail to promote or even reduce sustainable behaviour for some people,' Brook wrote. 'Understanding how to modify footprint feedback to more effectively motivate sustainable behaviour is urgently needed.' Brook suggests several possible consequences of this finding. Firstly, one possibility is that 'the ecological footprint should be targeted to people who are already invested in environmentalism...and should be used with caution, if at all, with the broader population.' Obviously this move would greatly limit the effectiveness of carbon footprint feedback for doing more than help those already highly motivated to target their efforts most effectively. The alternative would be to find ways round the deadlock. 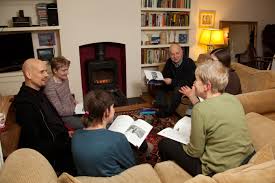 This is precisely where psychoanalysis and psychotherapy have something important to offer. The research findings of Brook suggest the operation of defence mechanisms employed to deal with emotional threats to self identity. From a clinical point of view, what seems to be needed is a safe containing space to 'hold' and work through the complex feelings that arise, including guilt, fear, shame, anger, loss, regret, etc., in a non-persecutory atmosphere of trust.

Psychoanalysis can help by moving beyond a purely data-driven approach to environmental problems by acknowledging the powerful role of emotions, our sense of self, and the unconscious in determining our actions (see Psychoanalysis and Ecology at the Edge of Chaos, Dodds 2011). Psychoanalytic psychotherapist Rosemary Randall discusses the carbon conversation project, a series of six meetings in which participants address climate change in a way which seeks to both engage with the reality principle through the carbon footprint task, but also employ methods and ideas derived from group therapy methods to give space to reflecting on values, emotions, lifestyle and identity as well as the basic facts of emissions. These can include our emotional investments in consumer products (such as particular cars) whose potential loss may threaten our sense of who we are.

Randall discusses how psychology and emotions drive behariour change in this video. Results show this approach is not only more psychologically sensitive, but more importantly as far as the planet is concerned, that it also works. A typical participant makes an immediate saving of a tonne of CO2 a year and develops plans to reduce emissions by 50% in 2–5 years. For a breakdown of carbon footprint per country and per capita, see the image below.

Randall has been at the forefront of psychoanalytic approaches to climate change, including her groundbreaking papers: A New Climate for Psychotherapy (Randall 2005) and Loss and Climate Change: The Cost of Parallel Narratives (Randall 2009). She is also active in the Steering Group of the Climate Psychology Alliance and contributed to the recent book Engaging With Climate Change: psychoanalytic and interdisciplinary perspectives (Weintrobe, ed. 2012)

Dodds, J. (2011) Psychoanalysis and Ecology at the Edge of Chaos: Complexity theory, Deleuze|Guattari, and psychoanalysis for a climate in crisis. Routledge