Both Martin and myself have chapters in this new anthology of UK ecopsychology writings from Karnac, edited by Nick Totton and Mary-Jayne Rust. We are placed together under Part III: The View from Postmodernism including the following chapers:

Martin Jordan: 'Did Lacan go camping? Psychotherapy in search of the ecological self'
Joseph Dodds: 'The ecology of phantasy: Ecopsychoanalysis and the three ecologies'


From the Introduction by Nick Totton and Mary-Jayne Rust:

" 'Vital signs' are, of course, the basic physiological measures of functioning which health practitioners use to assess the gravity of a patient s predicament. This anthology focuses not so much on our physical predicament, with so many of the Earth's systems severely stressed and beginning to fail - there are plenty of other places to read about this. Instead we focus on our psychological predicament, as news of the situation slowly penetrates our defences and we struggle as individuals and as a society to find an adequate response.

By 'vital signs' we also mean signs that such a response is beginning to take shape: signs of hope, signs of healing. We feel that ecopsychology in Britain has a distinctive voice and unique contributions to make. In doing so, we hope to facilitate debate and dialogue within the field, in the hope that this will lead eventually to more developed theory and practice. Things are still at quite an early stage in the construction of ecopsychology as a discipline, and the articulation of relationships of compatibility or incompatibility between various approaches. It will take time for the field to reach maturity, to agree on terminology (or agree to use different terminologies), and to develop organisational forms. This is a familiar process for any new way of looking at things.

At the same time as recognising this slow maturation, we are of course equally aware of the extraordinary urgency of the external situation which it is one of the missions of ecopsychologists to address. While there would in theory still be an important role for ecopsychology if we were not facing environmental meltdown - exploring the complex relationships between human and other-than-human, and the therapeutic value of bringing the two together - in practice ecopsychology has been completely shaped by a sense of catastrophic loss, of the irreversible destruction of complexity and the impending threat to the systems which sustain life on this planet. From this point of view, ecopsychology is part of a much larger movement seeking to develop awareness of climate change together with all the other developing ecological crises (pollution, over-consumption of resources, destruction of habitats, etc).

What distinguishes ecopsychology from many of the other players in this larger movement, however - apart from the psychological focus itself - is a very widespread perception of human beings as just one element in the global ecosystem; and an agreement, both ethical and practical, that humanity cannot save itself by throwing other species out of the sledge. The ecosystem stands or falls as a whole, human, other-than-human, and more-than-human; and a failure to recognise this is itself a symptom of our culture's dissociation from its place in the larger whole, which is one of the causal factors leading to our current situation.

Among people who have been working in this area for some time, there is a growing question: what if we fail? What if our society does not manage a transition to a carbon-free economy - and all of the other transformations of culture and practice which are required alongside this? In all probability time is getting extremely short; considerable damage to global ecosystems is already certain, and runaway 'tipping point' effects are predicted by many scientists. Although awareness of this crisis is far greater than it was a decade ago, there is still little sign of a serious shift in public attitudes. Indeed in the UK, and elsewhere, ecological concerns have been eclipsed by the recent economic crisis with seemingly little recognition that of course ecological, social and economic crisis are completely interwoven. While the future can never be predicted with certainty, there is not much concrete basis for optimism. What then?"
Posted by Joseph Dodds at 06:06 No comments:

Psychoanalysis and Ecology at the Edge of Chaos: Complexity Theory, Deleuze/Guattari and Psychoanalysis for a Climate in Crisis, by Joseph Dodds. (Routledge, 2011) 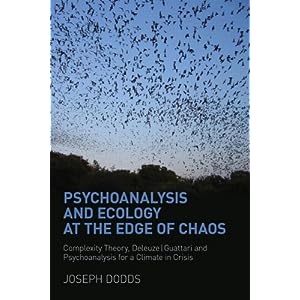 This book argues that psychoanalysis has a unique role to play in the climate change debate through its placing emphasis on the unconscious dimensions of our mental and social lives. Exploring contributions from Freudian, Kleinian, Object Relations, Self Psychology, Jungian, and Lacanian traditions, the book discusses how psychoanalysis can help to unmask the anxieties, deficits, conflicts, phantasies and defences crucial in understanding the human dimension of the ecological crisis.
Yet despite being essential to studying environmentalism and its discontents, psychoanalysis still remains largely a 'psychology without ecology.' The philosophy of Deleuze and Guattari, combined with new developments in the sciences of complexity, help us to build upon the best of these perspectives, providing a framework able to integrate Guattari's 'three ecologies' of mind, nature and society. This book thus constitutes a timely attempt to contribute towards a critical dialogue between psychoanalysis and ecology.
Further topics of discussion include:

In our era of anxiety, denial, paranoia, apathy, guilt, hope, and despair in the face of climate change, this book offers a fresh and insightful psychoanalytic perspective on the ecological crisis. As such this book will be of great interest to all those in the fields of psychoanalysis, psychology, philosophy, and ecology, as well as all who are concerned with the global environmental challenges affecting our planet's future.

http://www.routledgementalhealth.com/psychoanalysis-and-ecology-at-the-edge-of-chaos-9780415666121
Posted by Joseph Dodds at 05:12 No comments: